Why does it feel so good?  Buy a COCOTAP NOW

Here are some excerpts from some recent books on coconuts. This material is supplied with the authors’ Dr Bruce Fife N.D. and Dr Vermen M. Verallo-Rowell M.D.  permission. 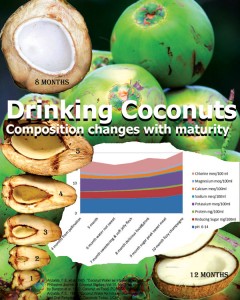 “Coconut water is sweet, increasing semen. promoting digestion, and clearing the urinary path,” says Ayurvedic medicine of India. Coconut water, also called coconut juice, is the liquid found inside a fresh coconut. Contrary to popular belief, this liquid is not the same as coconut milk.

Coconut water is in a sense a tree sap. It is a relatively clear liquid that looks more like water than it does milk. It is very sweet and tasty and is a favorite beverage among Asian and Pacific Islanders. In addition to natural sugars, it contains a complex array of vitamins and minerals, which make it a nutritious beverage. It is high in potassium, chlorides, calcium, and magnesium, with a modest amount of sodium, sugar, and protein. It is essentially fat-free. While the mineral content remains fairly constant, the sugar and protein concentrations increase as the nut matures.

Coconut water contains a variety of nutrients including trace minerals which come directly from the sea and which most other foods lack. Coconut palms grow abundantly throughout most of the tropics. Even the tiniest islands are covered with palms littering the ground with fallen nuts. On many small islands, coconut water is the only potable water available. For these reasons coconut water has been a lifesaver for many people and has been referred to as the “fluid of life.”

As a tree sap, coconut water is essentially the “blood” of the coconut palm. The electrolyte profile of coconut water is somewhat similar to human plasma and for that reason it has been used by doctors as an intravenous solution and injected directly into the bloodstream to prevent dehydration. When freshly extracted from the coconut, this liquid is free from germs and parasites. Doctors working in tropical climates have often used the water from coconuts as IV solutions, a common practice during world war 2 and in Vietnam where commercial IV solutions were often in short supply.* Water from unopened coconut is uncontaminated by bacteria, fungi, or other pathogens. Therefore, if properly prepared, it cancan be given intravenously without fear of introducing microorganisms. Recent research on the use of coconut water as an intravenous fluid has shown it to compare favorable with commercial solutions.* Coconut water does not harm red blood cells, is non-allergenic, and is readily accepted by the body. It is considered a safe and useful means of rehydration, particularly when a patient suffers from a potassium deficiency.* In fact, coconut water has been shown to be just as effective as commercial electrolyte solutions in prolonging survival times in sick patients.* Researchers have demonstrated that coconut water can be given through intravenous infusion by as much as one fourth to one third of the patients body weight without complications.

Coconut water is also highly recommended as a means for oral rehydration.* The water has been useful in tropical areas to overcome diarrheal dehydration. Diarrhea is a major health problem in    many third world countries. In the Philippines it ranks second among the causes of death and illness and kills nearly five million children there yearly. Excessive physical activity can also cause dehydration. Athletes and sports enthusiasts use coconut water to replenish electrolytes lost in perspiration. It works just as well as and even better than some popular commercial sports drinks. Coconut water is a natural sports drink.

The taste of coconut water varies depending on the age of the coconut. The water from mature coconuts, although good, doesn’t compare. Unfortunately, unless you live where coconuts are grown, it is difficult to get green coconuts. Until recently, just about the only way to get coconut water was to crack open a coconut. The demand for a natural sports drink has led to commercial packaging of young coconut water. It is now available in many locations in bottled and tetra pak containers.

Cholesterol Control Coconut water is more than just a sports drink or nutritive beverage. It is a health tonic. Research has shown that it has a positive effect on cholesterol. In one case study, for example, blood cholesterol levels of HDL (good) cholesterol increased by 46.2percent.*The researchers indicated that liver cholesterol levels were reduced by 26.3percent and risk of atherosclerosis (hardening of the arteries) decreased by 41.1 percent. Their conclusion was that coconut water is a natural, nutritious drink that could help prevent the formation of atherosclerosis.

Urinary and Reproductive Systems Coconut water has long been known for its therapeutic effect on the urinary and reproductive systems. It is reported to clear bladder infections, remove kidney stones, and improve sexual virility. Medical research has shown consumption of coconut water to be very effective in dissolving kidney stones.* Dr Eugenio Macalalag, director of the urology department at the Chinese General Hospital in the Philippines, says that coconut water has demonstrated its effectiveness in patients suffering from kidney and urethral stone problems. His patients have been able to suspend dialysis treatment after regular oral intake of coconut water. In the Philippines coconut water is commonly known as buko juice. Dr. Macalalag has also reported success in patients by directly infusing the water into the kidneys. He calls the treatment bukolysis. A saying that has now become popular in the Philippines is: “A coconut a day keeps the urologist away.”

Coconut water injected through urethral catheters inserted up to where the stones are lodged (bukolysis) has resulted in significant daily decrease in size, disintegration of the stones, and expulsion without the need for surgery. Even by oral intake coconut water, taken 2 or 3 times a week, has been observed to result in significant size reduction of kidney stones within a short time. Macalalag reports that, of his 1,670 patients who were recurrent stone formers and who took buko therapy, only 13 percent had recurrence of stones in a 10 year period, and the stones were small and passed out easily. Coconut water therapy is so effective that kidney stone patients are spared going through expensive medical procedures. Dr. Macalalag jokingly complains that because of this he has suffered from “AIDS” or what he calls “acute income deficiency syndrome.”

Coconut water is a natural diuretic so it increases urine flow. This helps to dilute the urine so that stones are less likely to form and helps to flush existing stones out. It is also helpful in preventing bladder infections.

Not only does coconut water clean out the urinary tract, it revitalizes the reproductive system. Coconut water from fresh green coconuts is reputed to increase libido and enhance performance. No need for Viagra here; coconut water will keep you young and virile. It doesn’t work only for men; women in their mid-60s have reported an increase in libido after drinking young coconut water. Water from a mature coconut, however, doesn’t seem to have as strong an effect. It must be from a fresh immature or green coconut.

Glaucoma Coconut water could be useful for those who have glaucoma. Glaucoma occurs when fluid pressure in the eye becomes abnormally high, causing damage to tiny blood vessels and optic nerve fibers. If left untreated, glaucoma can lead to permanent loss of vision. There is no cure for glaucoma; all that can be done is to prevent it from worsening. Treatment consists of putting medication in the eye to relieve the pressure. medicated eye drops must be used on a regular basis to keep fluid pressure under control. Coconut water has proven to be effective in significantly reducing fluid pressure in the eyes.* The water is not put in the eyes but taken orally. The effect lasts for 2 1/2 hours.

In addition, coconut water has shown to act as an antioxidant, scavenging many types of destructive free radicals and protecting hemoglobin in the blood from nitrite-induced oxidation.* These effects are most significant when using fresh coconut water. They diminish significantly when the water is heated or processed.

…Coconut water has its own biologicals: enzymes, nucleotides, active polypeptides, and growth factors…. Studies on growth factors in coconuts go back to 1941 when the Dutch plant physiologist Johannes Van Oberbeek saw the effect of the coconut’s water on the growth of a plant embryo. …Oberbeek discovered that the plant’s baby cells grew faster when coconut water was added to the culture medium*-just like mother’s milk helps babies grow. The growth slowed down when the water was removed.

…tests have been done on the cytokinins, gibberellins, and auxins from coconut water…It was discovered that these growth hormones were able to go through membranes and to remain stable and active even when exposed to heat, acids, or fermentation.

Studies: Kinetin Growth Factor for Anti-Ageing. … Many of the studies looked for the effects of Kinetin on plants when added to their water. What they found was that the plant cells were stimulated to divide, leaves were prevented from becoming yellow, and fruits did not become overripe* Plant biologists therefore make use of kinetin to delay the ageing and death of plants. …effect of kinetin on fruit flies. Kinetin, when fed to these flies, slowed down their development and ageing and prolonged their life spans….A continuing study made note of a marked increase (55% to 66%) in the activity of catalase, an important antioxidant enzyme in these fruit flies* How kinetin acts is therefore attributed, in part, to its ability to induce the appearance of more of this antioxidant….The next study was on people….The same kinetin that retarded ageing in plants and fruit flies, when added to the human fibroblasts in culture, also remarkably retarded the ageing of the skin cells. They stayed young looking and acted like young fibroblast cells in terms of their growth rate, size, and molecular activity….Can kinetin reverse the ageing of our skin? Yes.*….the results of these (current) studies, once published, can perhaps pave the way for a better understanding of this very promising product-not just for the cosmetic appearance of our skin but also for the potent antioxidant and age-retarding effects on other cell systems of the body…..
**These potent effects have led investigators to suggest that kinetin be considered for other applications, not only for delaying aging but also for preventing the degenerative changes that cause pathologic states such as Alzheimer’s disease. However, these are questions for others to investigate.

Plant (Cytokinin) and Hair (Cytokine) Growth Factors  Both plants and hair have a fertilized ground-base area (soil/papilla), a root matrix/system, a stem, which becomes the hair/trunk; and cells that move up and down this trunk. The similarities between plants and hair go far beyond these, to more actively potent ones; their growth factors.

After either plant or human growth factors are produced, some act directly on the cells in the same neighborhood. Others stimulate humeral (that means fluid) and cellular immune responses. Still others are proteins that bind directly to receptors on the cell surface. Once there, they direct or signal cells to begin to actively divide and grow into specific parts of the hair. In these various actions, there is always a balance: some promote, while others oppose the action…..